Developers have had an appetite for nearly all types of construction projects in the past year. But they may soon get indigestion as their contractors and lenders pass along the cost increases they are experiencing for materials, labor and money.

Census Bureau data covering spending on projects underway in the first two months of 2022 show a positive comparison to the year-to-date totals for January and February 2021 for most developer categories. The seemingly insatiable demand for warehouses grew an additional 23%. Not far behind, there were 19% increases in spending on both medical buildings (clinics, offices and labs) and retail structures (automotive sales, service and parking; food and beverage; shopping centers, malls and other types of stores). Spending rose at a more modest 6% rate for multifamily construction and 4% for offices (including data centers, which the bureau does not break out separately).

Two smaller segments bucked the overall favorable trend. Spending on lodging structures tumbled 26% from the first two months of 2021, while spending on “special care facilities” such as assisted-living and skilled- nursing facilities slumped 15%.

These numbers overstate the seemingly good news, however, for two reasons. First, the agency doesn’t adjust the dollars for inflation. Second, the totals include renovations as well as new construction. For instance, the retail totals include spending on replacing one tenant with another or converting a vacant big-box store to a distribution center.

The overstatement that results from construction cost increases is hard to quantify because the spending series include projects being built under fixed-price contracts that may have been signed years ago as well as new starts. In the current cost environment, that can make a large difference.

For instance, in the 12 months from September 2019 to September 2020, the producer price index (PPI) for inputs to new nonresidential construction increased 1.8%, according to the Bureau of Labor Statistics (BLS). The bureau estimated that the price that contractors said they would charge to erect new nonresidential buildings also climbed 1.8% during that period.

The “bid price” index continued to rise at an annual 3% rate or less through June 2021, even as the PPI for inputs (materials and services such as design and trucking services) accelerated to a 25% year-over-year rate. At that point, bid prices also began escalating steeply. By March, the bid-price index was climbing 17% year over year, while the growth rate for the inputs PPI had moderated slightly to a 21.5% year-over-year change. 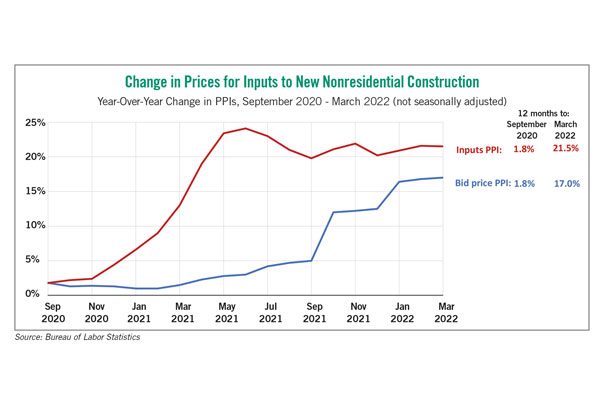 But materials costs accelerated again following the invasion of Ukraine and the sanctions imposed on Russia. Structural-steel producers implemented several large, immediate price increases. A leading supplier of roofing and insulation materials announced increases ranging from 6% to 75%. Many companies instituted or added fuel surcharges as the retail price of diesel fuel shot up 33% in five weeks to an all-time high of $5.25 per gallon on March 14.

Construction labor costs have also accelerated recently. BLS reported on April 1 that average hourly earnings for “production and nonsupervisory employees” in construction — primarily hourly craft workers — climbed 6.2% from March 2021 to March 2022. That was the steepest increase since 1982 and more than double the 2.5% rise a year earlier.

While there is no fixed relationship between contractors’ materials or labor expenses, at some point construction firms will pass these along in their bids or withdraw from market segments where they can’t cover those costs.

At the same time that developers are encountering higher construction expenses, they are also experiencing a sudden rise in interest rates, after years of virtually ignoring those costs. The Federal Reserve has signaled that it may raise its short-term rate target repeatedly for the rest of 2022 to help bring inflation down, while long-term rates have already risen rapidly and appear poised to go still higher.

None of these changes means the demand for property — or tenants’ ability to absorb rent hikes — is about to crumble. But together, the increases pose a much higher degree of risk than developers have faced in years.