The South Landing project in Spokane, Washington, demonstrates how properties can benefit from shared energy infrastructure.

In Spokane’s University District, education meets industry in a 1.2-square-mile area adjacent to the city’s downtown. In this urban laboratory of sorts — populated by five of Washington state’s major universities, two medical schools and community colleges — students and nearby businesses enjoy a cluster of mutual benefits.

The Scott Morris Center contains a laboratory and power plant that allow researchers and building operators to understand and learn from energy practices. Additional elements, such as mass timber construction, help achieve a net-zero carbon and energy status, bolstering the project’s sustainability.

South Landing benefits from both public and private entities, with a roster that includes McKinstry, local utility provider Avista, state grant funds, and Eastern Washington University (EWU) as an anchor tenant. While architecture and proximity often define notions of neighborhood, the project demonstrates that less-visible attributes, such as shared energy systems and a value-driven commitment to sustainability, can knit a community together.

South Landing’s notion of an eco-district relies on a shared heating, cooling and electrical system. The project’s smart buildings collect large amounts of data and use that information to pull power from and contribute to the grid for maximum efficiency.  Moreover, information collected via innovations such as ceiling panels that record temperature and lighting in real time create a granular level of management.

Heather Rosentrater, senior vice president of energy delivery and shared services at utility provider Avista, describes the “aha” moment that such data provides owners. For instance, Rosentrater says that tenants may demand one megawatt of energy at peak periods, which places increased demand on substations and raises costs. With data analysis, however, smart buildings can anticipate patterns of increased demand and respond accordingly.  For example, when a building demands power in the day, it’s more costly and cumbersome to produce because that’s the greatest power demand time. If a building can defer its power needs (by essentially banking power) to the evening when energy generated by nearby wind farms is integrated into the energy grid, it can reduce costs.

Buildings bank power by smoothing out demand — they anticipate heating needs and preheat a building, they use solar energy to charge batteries, and sensors regulate the temperature and lights so that the building delivers power where it’s actually needed.

The Scott Morris Center also underscores a commitment to environmental learning. The lab is on the ground floor of one of the two new neighborhood buildings. It’s sheathed in glass so that viewers can observe its inner workings. By displaying the plant in this transparent manner — albeit more expensively than a solid wall — the owners illustrate the central role that energy systems play in the development. The message is underscored in the evenings, when the plant’s interior illumination shines across the plaza.

Inside the lab, students and industry specialists collaborate on a variety of energy-efficiency projects. Rosentrater points to the lab as a venture where students can “fail fast, learn fast” in a setting that promotes innovation without compromising the dependability and service the utility strives to provide. For instance, the building ”learns” typical electrical usage patterns and can then anticipate demand. These real-life examples allow students to translate their experience to higher education or the workplace.

For Eastern Washington University, being adjacent to downtown Spokane was a primary factor in the decision to lease the Catalyst building. The “most enticing piece was the philosophy of the Catalyst (building) being the connection between higher education and industry to work on practical applications,” says Dr. David May, interim president for EWU. May adds that ”it’s a perfect way to live what we are supposed to be doing,” which is serving “as an economic and workforce driver in the region.”

The state-of-the-art quarters have allowed EWU to design a space that works with its academic programs. As the 110,000-square-foot anchor tenant at Catalyst, EWU will house engineering, computer science, business, public health and graduate writing programs in the building. These students and graduates provide a source of talent and intellectual capital, especially for the region’s numerous health care and life-science companies.

Catalyst is pursuing the International Living Future Institute’s (ILFI) net zero carbon and energy certifications. This standard requires on-site renewable energy to supply 100% of the building’s energy needs on a net annual basis. Additionally, 100% of the operational energy use associated with the project must be offset by new on- or off-site renewable energy, and 100% of the embodied carbon emissions impacts associated with the project’s construction and materials must be disclosed and offset.

A core ILFI principle requires “compliance based on actual, rather than modeled or anticipated, performance,” so the recently completed Catalyst will need to demonstrate such data over a 12-month period to earn certification. South Landing’s on-site Morris Center aids in collecting and calibrating energy performance. According to the ILFI, such an aspirational goal is the difference between moving “beyond merely being less bad” to “truly regenerative.” The overarching philosophy requires more than just best practices, and it embraces leading-edge technology and advanced practices.

In addition to its shared energy system, Catalyst uses building materials to deepen its sustainability. Catalyst’s design incorporates roughly 4,000 cubic meters of locally sourced mass timber, produced by Katerra, in both structural and design elements. Mass timber is an engineered wood product in which several wood layers are laminated and compressed to create solid columns, beams and panels. Innovative lamination processes allow wood providers to use the entire tree, including the crown and small branches typically left behind on the forest floor.

In Catalyst’s case, the mass timber enables the building to achieve near-passive house levels of thermal performance. Passive house is a construction standard for super-energy-efficient buildings in which the structure itself does not create additional heating demands.

Further, wood’s lighter weight makes transportation — from forest to installed panel — less costly and environmentally impactful than steel or concrete. Catalyst’s developers estimate that the use of such timber helps to collectively offset approximately 5,000 metric tons of carbon.

While the initial capital costs of building an eco-district can be high, they are not out of reach for private developers.  Although the South Landing project benefits from a substantial $7 million grant from the state of Washington, the eco-district is considered “a replicable model for the private sector,” according to Allie Teplicky, real estate development manager at McKinstry. Teplicky says the ownership team has structured leases in such a way that tenants pay competitive market rates for utilities while the savings from smart usage and management accrue to the landlord over time. That offsets the initial intensive capital investment for the power plant and infrastructure. This arrangement implies a long-term-hold strategy for the landlord, although the cost savings presumably would benefit any owner and would be inherent in the property’s market value.

South Landing’s Catalyst building and Innovation Center appear to be kick-starting an eco-neighborhood model in Spokane. The shared energy infrastructure, the operational systems that communicate with each other, and an underlying culture of sustainability create a tightly bound community that benefits from economies of scale. Other than the visible power plant on site, these commonalities remain mostly unseen, yet they underpin the building’s experience and performance. Like the sensors that quietly monitor light and temperature adjustment, the seamless adjustments create a comfortable environment for a range of occupants. 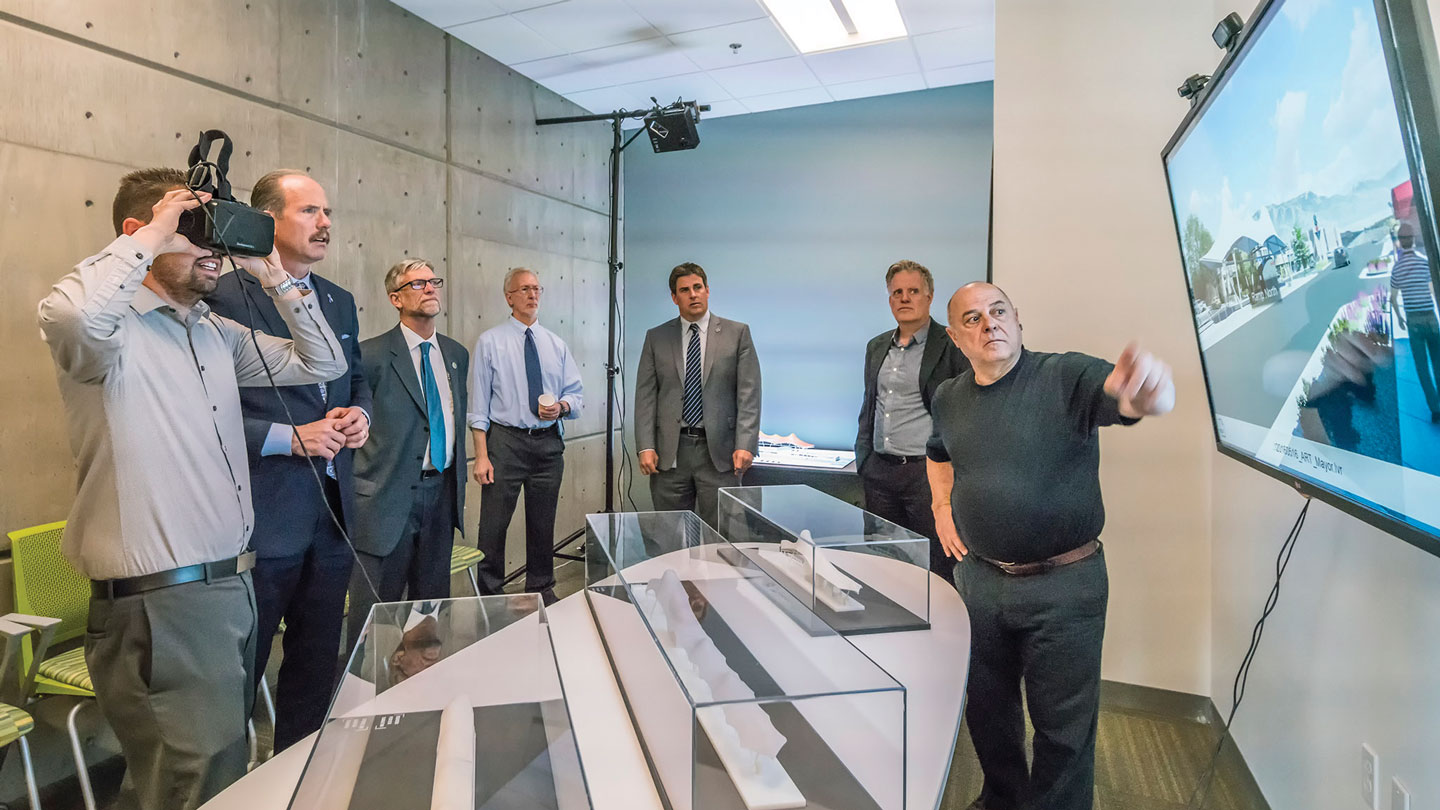